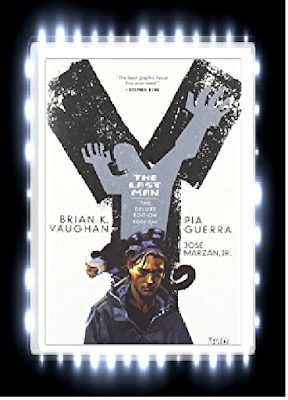 Yorick Brown was a twenty-two year old young man who had a job as an amateur escape artist.  He was planning on proposing to his girlfriend Beth when all of a sudden, all the men and the male animals around the world started dying off when a mysterious plague hits the world and only the males with the Y chromosome are affected.  Fortunately, only Yorick and his pet male monkey Ampersand survived the plague and now Yorick must find out more about the plague and try to save mankind while trying to find his girlfriend Beth who is on the other side of the world!

The premise and Brian K. Vaughan’s writing: When I first heard about this book, I was thinking to myself about how would you write a book about being the last man standing on Earth?  Brian K. Vaughan has done an impressive job at bringing out that aspect as it was done in an extremely creative and intense way!  After reading so many books that deal with a post-apocalyptic setting, whether it dealt with oppressive governments (The Hunger Games) or crime ruling the city (Fray), “Y: The Last Man” was a truly unique case of a post-apocalyptic setting as it has it set up where all the men (including the male animals) of the world are wiped out, leaving only the women to occupy the world, which gives us a “what if” moment about what would happen if one gender is wiped out by an unknown force?  I loved the way that Brian K. Vaughan really delved into the set up of this world as not only do we readers try to find out what caused the plague that caused the death of many men around the world, but we also see how the women of the world try to deal with the politics and the technology that were once occupied by the men.  I also loved the main character Yorick Brown as he is extremely funny and optimistic, despite being the last man on Earth and I enjoyed seeing him trying to help the women who are trying to save mankind accomplish their goals and I loved the witty dialogue that Brian K. Vaughan wrote for all the characters in this book.

Pia Guerra’s artwork:  Pia Guerra’s artwork along with coloring by Pamela Rambo and inking by Jose Marzan Jr., really brought out a dramatic feel to this story as the characters look realistic and the colorings really brought out bright yet intense feel to the story.  Probably some of my favorite artwork in this graphic novel was of Yorick himself as he has brown wavy hair and also has a laid back look on his face that really made me feel for the character.

Probably the only problems with this graphic novel are that there is some strong language in this book like the “f” word and the “s” word and some disturbing content.  The idea about a plague killing off the men in the world is a disturbing thought and could scare some readers who are uncomfortable about the subject of diseases spreading around the world.

Overall, “Y: The Last Man” is easily one of the most CREATIVE, INVENTIVE and INTENSE graphic novels I have ever read and I would HIGHLY RECOMMEND this book to anyone who is a huge fan of Brian K. Vaughan’s works and love reading about post-apocalyptic worlds!