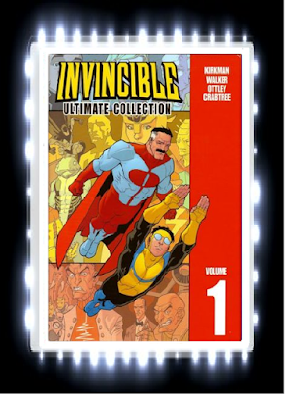 Mark Grayson was a normal teenage boy who goes to high school, has crush on girls and has a dull after school job like everyone else. However, what makes Mark different from everyone else is that his father, Omni-Man is the world’s most powerful superhero and Mark seems to have inherited his powers!  After Mark discovers his powers, he finds the life of being a superhero fun; but then once a dark secret is exposed, Mark’s life will soon change forever!

Robert Kirkman’s writing!:  Now, I am not too familiar with Robert Kirkman’s work since “Invincible” is the first comic I have read by him,  but now that I had just finished reading this graphic novel, I am totally hooked on Robert Kirkman’s writing style!  Robert Kirkman has done a brilliant job at developing the characters to the point where we can really sympathize and care about their situations.  I loved the character portrayal of Mark Grayson as he is portrayed as being a free spirited character that enjoys having superpowers while trying to balance his life at school and I loved seeing that side of Mark as he knows he has responsibilities, but he still wants to enjoy life.  I also loved the way that Robert Kirkman would make parodies of superheroes in this comic such as the superhero team “Guardians of the Globe” being a slight parody of the Justice League and yet, these superhero teams are not like carbon copies of the superheroes we see in Marvel and DC as they seem to have qualities that separates them from the other superheroes.  Robert Kirkman also did a fantastic job at providing humor in this story as I found myself laughing at the statements being made by the characters, especially by Mark Grayson when he made comments about finding out about his powers for the first time and he just casually told his parents about his powers like it is no big deal.  What I really loved about Robert Kirkman’s writing is his ability to provide plot twists to the story and the plot twists were done extremely well as I was literally shocked at the various secrets that were exposed about the characters.

Cory Walker and Ryan Ottley’s artwork:  Cory Walker and Ryan Ottley’s artwork is a bit unique as it has a simplistic look and yet during the action scenes, is drawn in an effective way.  I loved the artwork of the characters’ expressions whenever they are confused about something as their eyes are drawn as little black dots instead of having their normal eye shapes which really brings out the humor in the situations.  I also loved the coloring done by Bill Crabtree as the artwork looks extremely colorful and I loved the shadowing on the characters’ faces whenever they are in dark places such as being outside during the nighttime.

This graphic novel is surprisingly gory as there are many scenes of characters being torn apart and you can see blood squirt out everywhere and their innards being pulled from their bodies.  Anyone who does not like seeing gore in any graphic novel might want to skim over these scenes.