[BOOK REVIEW] The Invention of Hugo Cabret by Brian Selznick 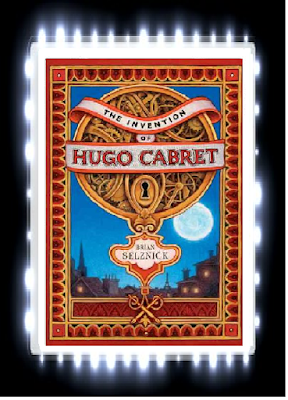 Title:  The Invention of Hugo Cabret

Words cannot describe how much I loved this book! “The Invention of Hugo Cabret” is one of the first chapter books to win a Caldecott Medal and is cleverly written and illustrated by Brian Selznick and it is about how an orphaned boy named Hugo finds out the secrets contained in his most prized possession…a mechanical man from his dead father. “The Invention of Hugo Cabret” is clearly one of the most exciting and amazing books ever created for children!

Brian Selznick has created a book that goes beyond what any children’s book has gone before. Brian Selznick has made this story extremely dramatic and exciting at the same time as it details the adventures of an orphaned boy in Paris and how he tries to uncover the mystery of the mechanical man. Brian Selznick makes the characters in this book extremely memorable, especially the main character Hugo Cabret as Hugo is shown as a boy who has a huge ambition and yet he always feels lonely and insecure when he is around other people, since he spent most of his life alone and children will easily sympathize with his situation as any child might feel a bit secluded from other people whenever they lose a loved one. Another memorable character is Isabelle, the toy maker’s daughter who is shown as being a strong heroine and she is always shown yearning for more information about life that she will not let anyone get in her way, including Hugo. Brian Selznick also makes the story extremely creative as the book is set up as two pages are filled with writing while the next few pages are full of illustrations only. Brian Selznick’s illustrations are amazingly beautiful as they are mainly in black and white colors, but the characters look so realistic that they make this book extremely beautiful to look at. The illustrations also help move the story along as there are two pages full of writing while the next four or five pages are full of illustrations that detail what happens in the story and the next few pages are full of writing again while continuing the story. Brian Selznick illustrates the characters’ expressions in such a realistic manner that ranges from shock to happiness that children will easily relate to the characters.

“The Invention of Hugo Cabret” is a truly distinguished children’s book that is ahead of its time and it will always remain to be one of the best books ever created! I would recommend this book to children ages seven and up since the length of this book might bored smaller children.