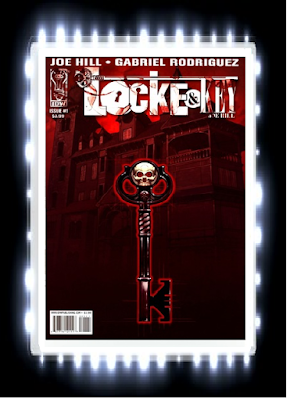 After reading Neil Gaiman’s fantastic “Sandman” series, I never would have thought that there would be another graphic novel that blends horror and mystery perfectly together.  But I was wrong as I soon discovered a new graphic novel that does just that called “Locke and Key: Welcome to Lovecraft!”  “Locke and Key: Welcome to Lovecraft” is an Eisner Award nominated graphic novel superbly written by Joe Hill along with dramatic artwork by Gabriel Rodriguez and it is definitely a horror/mystery story that is definitely worth checking out!

The story starts off with three siblings named Tyler, the oldest son, Kinsey, the middle daughter, and Bode, the youngest son and how when they were spending the summer at their family’s home, their father was brutally murdered by two strangers right before their very eyes.  After their father’s funeral, Tyler, Kinsey and Bode had a hard time coping with life after their father was killed and they along with their mother who managed to survive the tragedy, decided to move to the city of Lovecraft to leave their old life behind.  However, it turns out that the home that Tyler, Bode and Kinsey all moved into is no ordinary home as Bode soon discovers that the house has dark secrets that only he knows about and those secrets will soon change all three siblings’ lives forever!

Words just cannot describe my feelings and my love for this graphic novel!  I have never read a comic series that really knows how to blend horror, loss and mystery all into one glorious story that will remain to be an all-time favorite among comic fans!  Joe Hill has certainly done a brilliant job at writing this story as it is full of suspense and mystery that will keep you wanting more from the story!  I loved the way that Joe Hill focused on how the three siblings Tyler, Kinsey and Bode all deal with the murder of their father and how they all reacted differently to the situation such as Tyler blaming himself for his father’s death, Kinsey not knowing about what to do with her life without her father and Bode, being extremely young, not quite understanding the seriousness of the situation.  I felt that knowing what these characters are going through after the tragedy that has taken place really gave them so much depth in their characters and I actually felt sad for Tyler, Kinsey, Bode and their mother as they had to deal with the loss of the person they love so dearly.  I also loved the way that Joe Hill brought the supernatural themes into the story without really interrupting the tragedy that the characters were going through as I was practically on the edge of my seat trying to figure out how the keys provide a sort of alternative dimension portable for the characters and I want to see how collecting all the keys to the house would change events for the characters.  Gabriel Rodriguez’s artwork is brilliant as the artwork has dark coloring that fits the gloomy mood of this story extremely well.  I also loved the way that Gabriel Rodriguez drew the images of the supernatural activities taken place such as the images of characters turning into ghosts and you can see the blue wisps of the characters themselves floating towards the reader.

Probably the only issues with this book is that it surprisingly has some really strong language that you would not find in mainstream comic books and that makes it more difficult for younger readers to get to read this story.  Also, there are some disturbing moments in this book that not only involves the brutal murder of Tyler, Kinsey and Bode’s father, but also has many scenes of innocent people being killed throughout the book.  Also, the supernatural elements such as the characters becoming ghosts might be a bit disturbing.

Overall, “Locke and Key: Welcome to Lovecraft” is a brilliant introduction to the “Locke and Key” series and now that this volume has ended on a huge cliffhanger, I am now looking forward to reading more adventures of Tyler, Bode and Kinsey and will soon be picking up the second volume “Head Games” pretty soon!