[BOOK REVIEW] The Cat in the Hat by Dr. Seuss 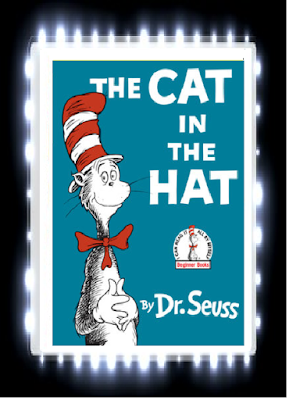 Title:  The Cat in the Hat

Dr. Seuss’ superb rhyming text is as creative as it is funny. He easily finds the perfect rhyming of each word while telling a story through his rhymes. Dr. Seuss’ illustrations are also excellent in this book as the coloring in this book mostly consists of red, white, blue, and black. Dr. Seuss’ illustrations always stand out from other children’s books and the illustration that stood out the most was the image of Sally being pulled by one of the kite strings as Thing One and Thing Two are playing recklessly in the house. Most children’s do not put images of children being pulled by something that could endanger them, but “The Cat in the Hat” does it so delicately that it is not really a threat to the book’s young audience. This image also showcases that when the boy emphasizes that what the Things were doing was not fun at all, he shows Sally being forcefully pulled in by the Things’ riotous antics.

“The Cat in the Hat” is known as the cult classic from Dr. Seuss and deserves this honor. The book strongly emphasize the consequences of letting a stranger into a house while the adult is away and how the boy finally comes to his senses to realize that both he and Sally could get in trouble with their mother if he does not stop the Things from destroying the house. “The Cat in the Hat” is a greatly treasured book that will remain to be popular for many years.