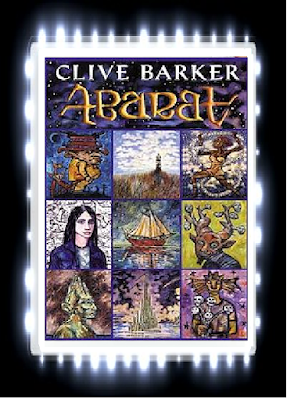 I remembered reading Clive Barker’s classic story, “Abarat” years ago when I was in high school and I remembered really enjoying the story when I first read it.  Now, I have taken the time to re-read this book again and lo and behold, I love it just as much now as I did years ago!  “Abarat” is clearly a truly creative and exciting for fans of Clive Barker’s novels and exploring surreal fantasy worlds!

Candy Quackenbush was just a normal girl who lived in a boring town called Chickentown, where everything revolves around the history of chickens.  One day however, when Candy spots a strange man named John Mischief (whose brothers all stay on the horns of his head) being chased by a frightening creature named Mendelson Shape, she realizes that her world will change forever since she is thrown into a completely strange and fantastic world called Abarat.  Once Candy stays in Abarat meeting new friends and enemies most notably Christopher Carrion the Prince of Midnight, she starts to realize many unanswered secrets about herself that could decide the fate of Abarat!

I will admit that this was quite an unusual book to read!  Clive Barker has done an excellent job at both writing and illustrating this book about a young girl traveling to a strange and unknown world while finding out more about herself in the process.  Clive Barker’s writing is extremely interesting and beautiful as Clive Barker details everything that has happened in Candy’s journeys in vivid detail.  I loved the way that Clive Barker describes Abarat as being a place full of wonder, especially the part about how Abarat is a world that has islands that represent a different hour of the day such as the Great Head that represents eight in the evening and Gorgossium is an island that represents midnight.  I also loved the way that Clive Barker unfolds the histories of each character little by little without spoiling too much for the readers until the end of the novel which makes me really want to solve the mysteries of each character as the book goes on.  The characters in this book were fantastic, especially Candy Quackenbush and John Mischief as they brought life to the story.  Candy Quackenbush was quite an unusual heroine as she just easily gets used to the surreal nature of Abarat, which adds more mystery to her background and I also loved the spunky personality that Candy possesses as she always speak her mind and can be a friendly person if she is not threatened.  John Mischief is another character I was quite interested in, especially the fact that on his horns, he has the seven smaller heads of his brothers living on his horns, which I found extremely odd yet fascinating at the same time.  I also loved how brave and kind hearted John Mischief is, even though his past history is quite questionable.  Clive Barker’s illustrations are extremely colorful and creative and I loved the images of the islands that are in Abarat as they are colorful and gorgeous to look at, especially when the lands are surrounded by water and you cannot help but feel like you are actually experiencing the wonderful world of Abarat.  I also loved the images of the strange creatures that live in Abarat such as the image of John Mischief himself as he has red skin and has horns where seven small heads (which are his brothers) occupied his horns and some images of birds with skulls for heads.  I also loved the fact that Clive Barker manages to make this story have a perfect blend of “Harry Potter” (the magic elements) and “Alice in Wonderland” (main character travels to a strange land) as it made the story extremely creative to read.  Here is how I compare the characters from “Alice in Wonderland” to this book:

The only problem with this novel is that there are some violent content and disturbing images that some readers might not like.  Some of the violent content included are a fight with a dragon that involves stabbing and a few beatings of a character.  There are also some images that are a bit frightening to look at such as the image of Christopher Carrion himself as he has a pale face and he has a red box shaped mask that shows green worm like things that are the nightmares he keeps in the red box shaped mask.

Overall, “Abarat” is a truly wonderful book that anyone who loves reading fantasy adventure books will enjoy for many years to come! Now, I am off to read the second book in the “Abarat” series, “Days of Magic, Nights of War.”

*  2002 Borders Original Voices Award for YA or Independent Reader