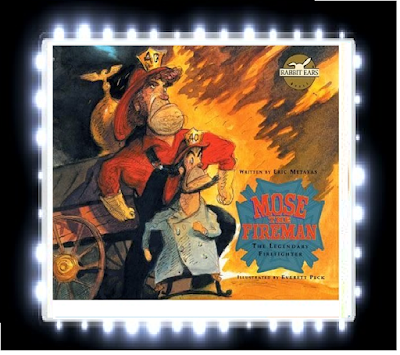 Moses Humphrey was born in 1809, the same year that Abraham Lincoln was born and one winter, there was an enormous fire in New York and it spread all over the city. While the firemen were putting out the fire, there was suddenly a huge explosion from one of the buildings as the top half of one of the buildings was blasted to pieces and the pieces of the top half of the building fell into the East River. The firemen thought that everyone who was trapped in the building was given up for dead until one of the fireman from engine number  forty heard a cry in a busted hog head. When the firemen went to inspect the hog head, they found a small red-headed baby inside the hog head and the firemen of engine number forty decided to adopt the child and they named him Moses, but everyone called him Mose.

Michael Keaton’s narration is brilliant and creative as he uses a New York accent to narrate the story, giving the story a spirited feel of the city of New York. Also, Michael Keaton sounds extremely rough yet smooth when he is narrating this story, making the characters, mainly Mose, somewhat tough guys while they save the town at the same time. Walter Becker and John Beasley’s music is jazzy and truly captures the spirit of New York. The music is also frenetic during the action scenes, making the scenes stand out very well as there is some tension added towards the music and yet the music is still jazzy enough to make people dance through the dramatic scenes rather than wait  in anticipation about what is going to happen next in the scene. Everett Peck’s illustrations are scratchy yet hilarious at the same time, giving a rough feel to the story. The illustration that is the true highlight of the story is the illustration of Mose himself as he has a squared chin and is extremely muscular and yet has a friendly  smile on his face throughout the video, making him somewhat a tough character who loves to help people wherever he goes.

“Mose the Fireman” is a great story for children who love to read stories about the world of firefighting and who also love to read about various tall tales in America . I would recommend this book to children ages five and up since some of Michael Keaton’s narration might be a bit too hard for smaller children to understand.