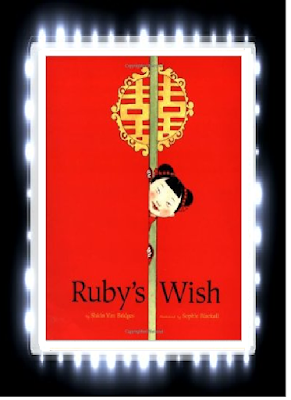 In ancient China, there lived an old man who had an enormous family of over one hundred children and out of all of the children, there was a little girl named Ruby who was the most unique out of all the children, as she is always shown wearing a red outfit for any occasion due to the fact that red is her favorite color.  Back during those times, even though all of Ruby’s grandfather’s children were able to attend school, only the boys were allowed to learn how to read and write, while the girls were only allowed to learn how to cook and keep house for their future husbands.  Ruby, however, has managed to obtain a special talent in learning calligraphy and she desperately wishes to go to a university instead of getting married.

Will Ruby be able to attend the university just like she always wanted?

Wow! This book was simply amazing and brilliant!  I never would have thought that I would read a children’s book that really stresses the importance of education while also teaching children about the importance of equality in the school system.  Shirin Yim Bridges did a brilliant job at writing this book as Ruby is shown as being a gentle yet independent girl whose only desire is to attend a university just like her male cousins, despite the fact that she was not allowed to attend university due to her gender.  I loved how Shirin Yim Bridges was able to tackle such a tough subject such as how women were not allowed to attend schools while men were and gave us a protagonist who was determined to break the norms of society to get want she truly desires and that made me really root for Ruby throughout the entire story since I believe that education is extremely important to anyone and everyone should have the opportunity to obtain a good education for themselves.  Sophie Blackall’s artwork is truly amazing to look at as we get to see how ancient China looked like and I really loved the exotic clothing worn by each character, especially by Ruby who is constantly seen in a different variety of red clothing.

Overall, “Ruby’s Wish” is a truly beautiful and inspiring book that teaches children to stand up for what they believe in and expresses the importance of a good education for everyone.  I would recommend this book to children ages four and up since there is nothing inappropriate in this book.