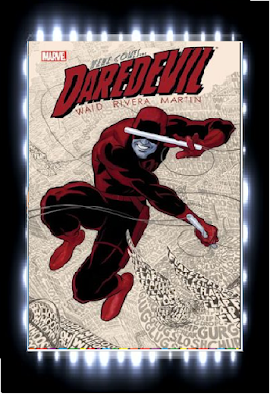 Now, I will admit that the first “Daredevil” comic I had actually picked up was Frank Miller’s “Daredevil: The Man without Fear” comic, which I enjoyed immensely!  Now, I am diving into Mark Waid’s portrayal of the legendary superhero Daredevil and I will admit that I found this version of “Daredevil” pretty interesting so far!

After the events of “Shadowland,” Matt Murdock has finally returned to New York City at his old law firm.  But due to outing himself as Daredevil, Matt is finding it more difficult to hide his secret identity as everyone at his law firm are starting to take advantage of this secret and making Matt give up various cases due to the court not supporting his secret identity as “Daredevil.”  Later on however, Matt soon discovers that there are some mysterious crimes at work in New York City.  First, the Klaw, Master of Sound, ends up returning to the city and then, Matt ends up trying to help out a blind kid who is accidentally thrown into danger when the kid overhears the plans of an international criminal organization, that involves the world’s most fearsome supervillain groups like H.Y.D.R.A, and the organization is looking to kill the blind kid in order to keep their plans a secret.

Mark Waid’s writing: I must admit that Mark Waid’s portrayal of “Daredevil” was pretty interesting and hilarious to read since I was so used to reading about “brooding and dark” Matt Murdock!  I loved the way that Mark Waid made Matt Murdock into a more fun-loving and witty character as it had been years since we had seen a more laid back Matt Murdock and it really made reading about him more interesting and fun!  I also liked the fact that Mark Waid made some references to Matt’s past events in “Shadowland” as it does indeed affect Matt’s current life, especially with the whole city knowing that he is Daredevil and Matt repenting for his actions in “Shadowland.” But probably the best thing about this volume is the fact that even if you have not read “Shadowland” (and I definitely have not read “Shadowland” yet), this volume makes it easier to jump into the story without having to learn so much about “Shadowland” to completely understand the story.

Paolo Rivera and Marcos Martin’s artwork:  Paolo Rivera and Marcos Martin’s artwork are truly creative and colorful to look at and greatly complements the mood of the story!  I loved the way that both Paolo Rivera and Marcos Martin detailed the sound waves and effects that Matt Murdock sees in order to sense when people are nearby due to his blindness as it was truly creative! I often wonder how the artists would be able to portray Daredevil’s senses through the art and it was done so beautifully in this volume as you can actually see the sound waves coming from the person that Matt senses which makes the reader actually feel the senses that Matt is sensing.  I also loved the way that the fighting scenes are drawn as they made the fighting sequences extremely interesting to look at!

The reason why I gave this volume a four star rating was because I felt that the story tend to jump all over the place, mainly during the first half of the volume.  I actually felt that the second half of the volume was much more superior as we had a straight forward story than we did in the first half of the volume.  Also, I will admit that because I did not read “Shadowland” before I dived into this volume, I was a bit confused about how everyone found out about Matt’s secret or how Matt went out of control during “Shadowland.”

Overall, “Daredevil Volume One” is a great volume to read if you are a huge fan of “Daredevil” and if you want to read a comic book that is full of fun and action!