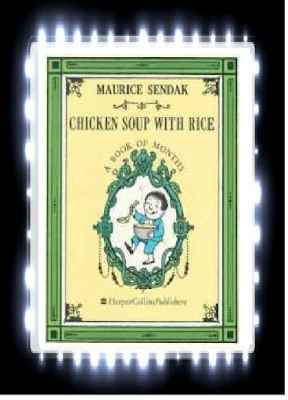 I have always loved Carole King’s version of this classic book by Maurice Sendak and when I finally read this book, I was so intrigued by Maurice Sendak’s illustrations and writing in this book.  Maurice Sendak did an excellent job at writing this book in a lyrical and poetic way, which makes the book extremely hilarious and creative at the same time by putting hilarious situations with each month described in the book.  My favorite poem in the book was the poem about the month of March, which is recited as:

In March the wind
Blows down the door
And spills my soup
Upon the floor.
It laps it up
And roars for more.
Blowing once
Blowing twice
Blowing chicken soup with rice”

Maurice Sendak’s illustrations are truly beautiful and creative as the main colors used in the illustrations are yellow, black, grey, green, and white and also, the illustrations have a somewhat scratchy look that provides the old fashioned feel to the story. Also, the main character, which is a boy, is the same boy that shows up in all of the Nutshell library book series which will help many children realize that this boy is apart of the Nutshell library book series.  What I loved the most about these illustrations is that the boy is always shown doing something ridiculous that deals with the month being mentioned such as the image of the boy swimming in the ocean while a turtle is stirring up chicken soup at the bottom of the ocean during the month of July.

“Chicken Soup with Rice” is the perfect book for children to learn about the months of the year in an extremely creative and hilarious way and it will certainly be the cult classic hit of the century!  I would recommend this book to children ages four and up since there is nothing inappropriate in this book that might cause parents to worry.