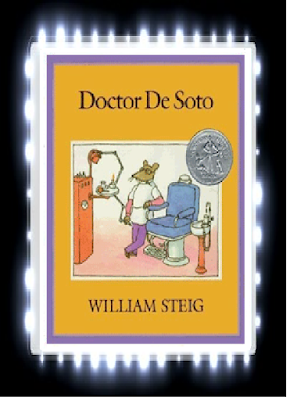 “Doctor DeSoto” is a popular book written by the master children’s books, William Steig. This book is most notably known for winning the Newberry Honor Book award and has remained to be a favorite among the young readers for many generations.

Doctor DeSoto” has an extremely unique storyline about deception. The fox was trying to be friendly towards the DeSotos in the second half of the story, thinking that they would not suspect his malicious intentions. But, Doctor DeSoto comes up with a creative solution in outfoxing the fox and therefore, turns the tables on the fox. Doctor DeSoto’s trickery towards the fox is probably one of the greatest trickster moments in book history since in “Stephanie’s Ponytail” when Stephanie tricked her classmates into shaving their heads bald. William Steig’s illustrations are vividly detailed as he masterfully illustrates the expressions on the characters’ faces of pity and uncertainty from the fox as he is treated by Doctor DeSoto and how Steig illustrates the buildings in the cities by coloring the buildings mostly brown and red and having the interior of each building be filled with flowers, couches, and colorful wallpapers that create a homely atmosphere to the story.

Parents should know that there is a brief image of the fox’s tooth being pulled out by a lever machine and the tooth is somewhat bloody as drops of blood fall from the tooth. Young children who are frightened of the dentist may worry about this image so parents should try to either skip over this image or reassure their children that the fox is alright from this procedure, even though he states, “I’m bleeding!”