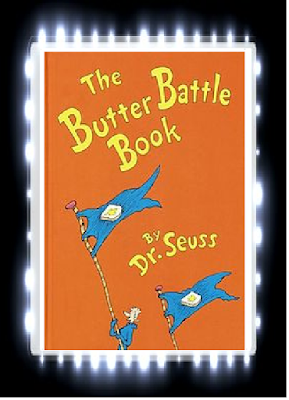 The book starts off with a grandfather character telling his grandson about the great battle between the Zooks (orange uniformed people who ate their bread with the butter side down) and the Yooks (blue uniformed people who ate their breads with the butter side up).  The battle between the Zooks and the Yooks started when one of the Zooks shoots off the grandfather’s Snick-Berry Switch with a slingshot and the grandfather goes to Chief Yookeroo to get a better weapon that can beat out the weapon of the Zooks.  Unfortunately, the Zooks keep on making better weapons than the Yooks, while the Yooks constantly try to build a better weapon to match with the Yooks’ weapon, which causes the book to come to a surprising conclusion!

Who would have ever thought that I would ever come across a Dr. Seuss book that discusses about war?  Well, I have come across other Dr. Seuss books that have a heavy message (“The Lorax” and “The Sneetches”), but this was what I called one of Dr. Seuss’s darkest books since it discusses about a topic that is often serious to many children…WAR.  It was also surprising that this book was actually a parody of the Cold War (the war between the United States and the Soviet Union) as both the Zooks and the Yooks tried to best each other with having a better weapon than the other side.  Even though I do not usually read books that have war themes because of the whole “only one side can win in this war” mentality that is constantly being shown in these types of books, this was one of the few war books that I had read that actually had a brilliant moral to the story:

Since the premise of this book is about how both sides do not like each other because they spread their butters a different way on their breads, you might be thinking to yourself about how ridiculous this all is and why both sides could not reach a compromise about spreading their butter on both sides of the breads.  But, what I loved about the way that Dr. Seuss wrote this book was that both sides were not portrayed in a positive light since the Zooks seem like bullies and the Yooks are prejudiced towards the Zooks for buttering their breads differently and that might sound a bit odd, but it was appropriate enough to bring the theme of this book home.  The reason why I have such a huge dislike for wars is because both sides that participate in the wars can be shown in a negative light if they believe that fighting is the only solution to whatever problem arises instead of sitting down and talking about the problem and coming to a reasonable solution that can benefit both sides.  I loved the way that Dr. Seuss made a statement about how ridiculous the war between the Zooks and the Yooks really was because having a war about who has the best weapons seems like a ridiculous reason for countries to fight each other and we can easily see that through the Zooks and Yooks’ actions throughout this book.  Dr. Seuss’ illustrations may look a bit darker than usual, but still has the usual creative flair as the Zooks are always shown in orange jumpsuits while the Yooks are always shown in blue jumpsuits and I also loved the different weapons that each side has, especially the Zooks’ weapon that was called the Eight-Nozzled, Elephant-Toted Boom-Blitz which looks like a machine that has eight nozzles and is being carried by two mean looking purple elephants.

Probably one of the most controversial things about this book was the abrupt ending.  I will not tell you what happens at the end since I do not want to spoil this book for anyone, but you will be left wondering about what happens next after the events of this book.  I will admit that I was actually mad at how the book ended, but then since this book was written during the Cold War, it is understandable about why the book ended the way it did.  It makes me wonder about if they ever thought about making a “Butter Battle Book” movie, will the conclusion be changed in the movie and how will they go about it?  Also, the theme about the Zooks and the Yooks going at war with each other might be a bit disturbing for younger children, especially if they do not understand about the motives of wars or if they do not like seeing characters fighting each other.

Overall, “The Butter Battle Book” is easily one of the best books about anti-war ever written and anyone who is a fan of Dr. Seuss’ works or would love to read about how terrible wars are will definitely not be disappointed in this book!  I would recommend this book to children ages six and up since the war themes might upset younger children.