[BOOK REVIEW] The Sandman: The Wake Volume 10 by Neil Gaiman 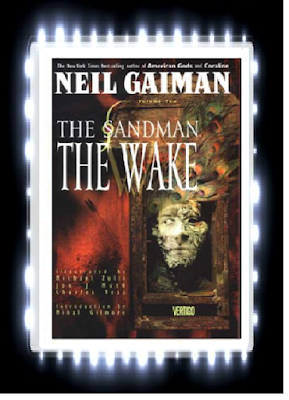 Title:  The Sandman:  The Wake Volume 10

Who would have ever thought that one volume from a fantastic graphic novel series would be one of the most memorable and tear jerking stories ever written?  That is what the tenth volume in Neil Gaiman’s brilliant “Sandman” series “The Wake” is all about!  Long time fans of the fantastic “Sandman” series will mourn along with the main characters over the death of Dream while experiencing the different emotions running through the characters along the way.

After Morpheus (Dream) ended up sacrificing his own life to save the Dreamworld from collapsing in “The Kindly Ones,” a ceremony that takes place in the Wake is held to honor his memory and all the characters including Dream’s siblings, all ended up coming to his ceremony.  Also, the story goes on about how Daniel, Hippolyta Hall’s son, ends up taking over Dream’s former position as Lord of the Dreamworld and how the other characters, mainly Matthew the Raven react to the new lord.

After reading this heartfelt volume about the characters agonizing over the death of Dream, I found myself feeling sad too, for not only Morpheus’ death, but also because of the fact that this might be the last time we see more adventures from Neil Gaiman’s “Sandman” series.  Neil Gaiman has brilliantly wrote a touching and heartfelt volume that provides as a sort of conclusion of the “Sandman” series and seeing all the characters we have known over the years such as Rose Walker and Dream’s siblings mourning over the death of Dream was a truly memorable experience for me.  I loved the way that Neil Gaiman detailed the reactions from all of the characters when they found out that Dream died, especially with Matthew the Raven who refused to accept the new Dream, who is Daniel, and blamed himself for the death of Dream, which showed us how close Matthew was to Dream.  I also loved seeing the sad reactions from Dream’s siblings (Death, Despair, Delirium, Destiny and Desire) and how they were forced to move on and greet the new Dream lord, even though they miss their brother dearly. The acknowledgement that Neil Gaiman presented at the end of the volume was truly heartwarming as he expresses about how the “Sandman” series strongly relates to himself and how much he really enjoyed working on the series. The artwork done by the combined forces of Michael Zulli, Jon J. Muth and Charles Vess greatly brought out the beauty in this volume, especially Michael Zulli’s artwork in the story arc “The Wake,” which the characters look much more realistic and the artwork seems to have a classic Renaissance feel to them as the characters look like they were paintings that came from the Renaissance era.  Jon J. Muth’s artwork in the short story “Exiles” was brilliantly done as the artwork seems to come out of an abstract artwork that you would find in an art museum as most of the coloring are in black and white while there are some coloring that emphasizes a certain scenario that the characters face.  Charles Vess’ artwork in the final story “The Tempest” was beautifully done as the artwork has a sophisticated and old fashioned feel that greatly complements the characters including William Shakespeare.

Probably the only problem with this volume is that there is some strong language including dropping the “s” bomb a dozen times and some readers might be offended by the strong language.  Surprisingly though, this is the least violent volume I have ever read from Neil Gaiman’s “Sandman” series since it is basically detailing the characters’ reactions to the death of Dream, so readers will not have a problem with any gory scenes that just pops out of nowhere.

Overall, “The Sandman: The Wake” is everything I ever hoped for in a volume that sort of concludes the series (and I say sort of because there is an eleventh volume called “Endless Nights” that comes after this volume, which I will be reading!) All the characters’ story arcs are wrapped up nicely and I love the idea about a new lord of the Dreams coming to take over the Dreamworld.  “The Sandman: The Wake” is definitely a brilliant end to the “Sandman” series and I would highly recommend this volume to anyone who is a fan of Neil Gaiman’s “Sandman” series!