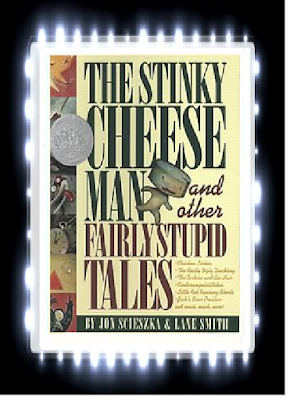 Title:  The Stinky Cheese Man and Other Fairly Stupid Tales

Back in 1989, “The True Story of the Three Little Pigs” was the most popular children’s book ever written and that’s where the Jon Scieszka and Lane Smith team made their famous trademark as children’s book writers. In 1992, a new children’s book, made by the Scieszka/Smith team has proclaimed its hallmark of fame as one of the funniest books ever written. That book is called “The Stinky Cheese Man and other Fairly Stupid Tales,” and has became a classic in its own right and won numerous awards, including the 1993 Caldecott Honor Book.

“The Stinky Cheese Man and other Fairly Stupid Tales” is one of the few books that contain so much humor. The humor is sarcastic as it is witty and the humor gives each character in the story a very unique personality that makes the reader want to be like them. Jon Scieszka’s storytelling is probably the book’s major strong point as he fills the book with witty humor such as, the Little Red Hen continuously popping up as an interlude to the other stories and the giant trying to make his own story by sticking together an odd assortment of pictures and words together. Lane Smith’s illustrations are fantastic and humorous, especially of the image of the wolf and Little Red Running Shorts leaving the story as it seems that they were cut out of the image of the house and the woods leaving two white spaces in the image.

“The Stinky Cheese Man” is a pure classic that will make people laugh for many years. Its good sense of humor and creative drawings by the dynamic duo, Jon Scieszka and Lane Smith has made this book an international success. I would highly recommend this book to anyone interested in good humor and creativity from the Scieszka/Smith duo.