[BOOK REVIEW] Something About You by Julie James 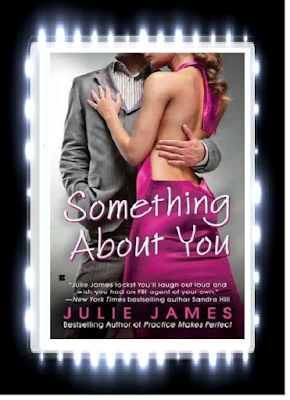 Title:  Something About You

Alright, this book has a number of firsts for me.  For instance, this was the first romantic suspense novel I have read and this is the first novel I have read from romance novel author, Julie James and it was definitely worth experiencing with!  “Something About You” is a romantic suspense novel by Julie James and this book is definitely on the top of my favorite romance novels list as it is full of drama, action and hot, smoking romance that will send any romance fans' hearts aflutter!

U.S. Attorney, Cameron Lynde, was spending the night at a luxurious hotel to relax when she notices that a crime scene had happened in room 1308, the room that Cameron was right next to and Cameron realizes that a prostitute named Mandy Lobard was murdered in room 1308 after she was making love to Senator Hodges!  Since Cameron was the only person who saw the mysterious person running away from the scene of the crime, she is a witness to this crime and to add on to her troubles, she finds out that Special Agent Jack Pallas has come back to Chicago to get to the bottom of this high-profiled homicide.  The problem with this arrangement is that Jack and Cameron have been enemies ever since three years ago when Jack made an unflattering statement about Cameron's involvement with the case of Roberto Martino being mysteriously dismissed all over national television!  Now, Jack and Cameron are finally reunited with each other, but can they rekindled the flame between them that was distinguished three years ago?

Recently, I have been reading many historical and paranormal romance novels and I have enjoyed reading each one!  Now, I have stumbled upon a romantic suspense novel that I have literally stayed up most of the night trying to finish because this was such a fantastic and exciting book!  There were many things about this novel that really interested me, but what really interested me the most was the history about the author, Julie James and how she was able to incorporate the inner workings of law firms into this novel.  Julie James had once clerked for the United States Court of Appeals in Jacksonville, Florida and has practiced law for many years before she become a writer.  I thought it was awesome seeing how Julie James was able to add in her experiences in the law firm through this book because not only did it made this novel up for some good reading, but it also made this novel so authentic that I was immensely into learning about the system of the law firm.  Julie James did an awesome job at balancing the romance and the mystery plots of this novel without making it favor towards one of the plots and it just created an exciting drama that I really cannot get over!

What I really loved about this novel were the main characters, Jack Pallas and Cameron Lynde.  I thought that the relationship between Jack and Cameron was extremely interesting since this was the first romance novel I have read where the plot involves a couple trying to rekindle a flame that was distinguished between them years ago and I loved the pace of how these two try to get back together as a couple without going through it too fast.  What was so awesome about Cameron and Jack's relationship was that Jack was willing to put his life on the line to protect Cameron and that is one aspect of a romance hero that really tops my heroes list and a guy I would not mind protecting me! Also, to top that, who would have thought that Jack would look so sexy in his casual jeans and t-shirt wearing outfit that exposes the ripples of his muscles? That is pure romantic hero heaven right there!  I also loved the heroine Cameron as she is intelligent and is extremely loyal to Jack, as she truly trusts him with her life.  If there is anything in this novel that made this novel a hot and sizzling read, it was the sex scenes between Jack and Cameron and man were they sizzling!

Overall, “Something About You” is a truly brilliant crime romance novel that anyone who is looking for action as well as hot romance can easily enjoy!