[BOOK REVIEW] One Was Johnny by Maurice Sendak 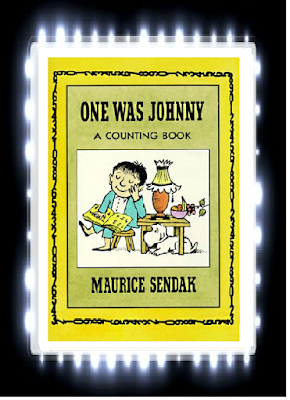 Title:  One Was Johnny

“One Was Johnny” is another classic book from Maurice Sendak’s popular Nutshell Library and it is about how a young boy named Johnny wanted to be alone, but he gets some uninvited guests while the book counts down on how many guests come into his house.  “One Was Johnny” is the perfect counting book for children who want to learn how to count in a creative and fun way.

Maurice Sendak’s illustrations are simply simplistic yet hilarious and creative at the same time.  Maurice Sendak used mainly black, yellow, white, blue and green colors to emphasize the simplicity of the book’s counting theme and Maurice Sendak uses the same little boy that he uses for his other Nutshell Library book “Pierre” as the boy also has a blue jacket and blue pants on.  Maurice Sendak’s verses are simply creative as he describes the various kinds of guests in his house by using numbers one through ten to explain the numbering system and the way that he makes each verse with each number rhyme with each other is extremely creative.  Another great thing about this book is that it was transformed into a TV special that was sung by Carole King, which is extremely catchy to listen to and children will definitely take a true liking to this book if they watch the Carole King version of this book.

Parents should know that there are some images that show the characters biting each other such as the turtle biting the dog’s tail and a blackbird pecking Johnny’s nose.  Parents should tell their children that it is not nice to bite other people and if parents are worried about the images being too graphic for small children, they do not have to worry much since the images are not graphic as it just shows the characters bite each other but there is no blood.

“One Was Johnny” is a brilliant book for children who want to learn how to count in a hilarious and unique way and also for children who are true fans of Maurice Sendak’s brilliant works.  I would recommend this book to children ages four and up since smaller children might be a bit unsettled by the images of the characters biting each other.