[BOOK REVIEW] The Sandman: A Game of You Volume 5 by Neil Gaiman 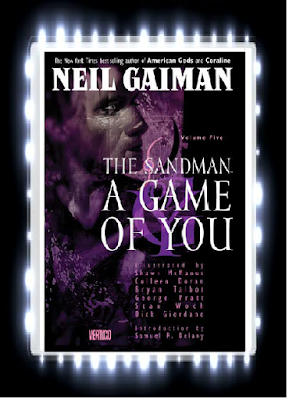 Title: The Sandman: A Game of You Volume 5

Neil Gaiman’s “Sandman” series just keeps getting better and better every time I read them and the fifth volume “A Game of You” definitely does not disappoint me!  This time, Dream (Morpheus) is dealing with a world that may look cute on the outside but on the inside, a sinister force is at work here and it is up to Dream to save the day!

In this volume, “A Game of You,” a young woman named Barbie (think of Ken and Barbie, the dolls that every little girl used to play with) who starts suffering dreamless nights after she broke up with her boyfriend Ken.  One night however, Barbie is put into a coma of sorts and her friends Hazel and Foxglove, two lesbian couples, Wanda, a drag queen and Thessaly, a quiet and mysterious woman try to enter Barbie’s dream world in order to rescue her from the forces of the Cuckoo, an evil being that is invading her dreams!  There are a total of six chapters in this volume and they are:

Chapter 1: Slaughter on Fifth Avenue
Chapter 2: Lullabies of Broadway
Chapter 3: Bad Moon Rising
Chapter 4: Beginning to See the Light
Chapter 5: Over the Sea to Sky
Chapter 6: I Wake Up and One of Us Was Crying

Wow! This volume was beyond fantastic and is probably the best volume I have read so far out of Neil Gaiman’s famous “Sandman” series!  Neil Gaiman has definitely done a brilliant job at weaving a truly frightening and exciting story about how Barbie is swept away in a dream world where she is a princess and the evil forces of the Cuckoo tries to kidnap her while her real body is in a comatose state in the real world.  I loved seeing the stark differences between Barbie’s dream world and the real world as the real world is dark and dreary while Barbie’s world seems to resemble a world similar to Narnia as she travels with talking animal companions and goes on an epic adventure to escape the evil forces of the Cuckoo.  I also loved how Neil Gaiman made this volume so dark and gory, since I am a huge fan of anything that has blood and gore in it and this volume definitely has tons of blood and gore that is shown in the most disturbing way possible!  The artwork by Shawn McManus, Colleen Doran, Bryan Talbot, George Pratt, Stan Woch, and Dick Giordano is truly amazing, especially with the scenes of Barbie being in her dream world as her dream world is set up as a world similar to Narnia as there are green trees and endless landscapes covering each page.  Also, I loved the details being put into the gory scenes that occur in the stories as they look truly gruesome and terrifying at the same time.

As with the other volumes in the “Sandman” series, this volume contains some extremely gory and bloody scenes that might make many readers’ stomachs turn.  One of the most disturbing moments in this book was when a character peels another person’s face off and then rips out the person’s eyeballs and their tongue out and nails the other person’s peeled face, eyeballs and tongue to the wall to talk to it.  This is definitely a truly disturbing scene that might make some readers feel really uncomfortable if they do not like seeing gory scenes in a novel.  Also, there is so much killing in this volume that might be too disturbing for readers who do not like reading about murders in novels.

Overall, “The Sandman: A Game of You” is easily the most disturbing yet the most exciting of Neil Gaiman’s fantastic “Sandman” series and it is definitely a favorite of mine that fans should definitely check out! I would recommend this book to readers ages sixteen up since there is so much disturbing content in this volume that would be too terrifying for younger readers.  Now I am off to read the next volume in the “Sandman” series, “Fables and Reflections.”